Home • Blog  • Side Chicks Beware, He Will Never Leave His Family For You!
By nhncouture
6 Comments
LIKES

Side Chicks Beware, He Will Never Leave His Family For You!

Chioma met Femi on a Rig work project.  They worked for different companies, but were assigned to work closely together on a contract project for almost three months. Within the first few days Chioma knew there was chemistry between them. They didn’t talk about their personal lives, but it was pretty obvious what his status was.  Femi wore a wedding ring.

As the days and weeks passed the chemistry became developed into full out flirting and Chioma found herself finding reasons to meet up with Femi for drinks after work.  In the beginning it was “to talk about the project,  however, it wasn’t long before they didn’t bother to make up excuses to see each other.   Chioma felt alright about it.  They weren’t “doing anything”.  Besides the project would be over soon and she wouldn’t see him after that.

Three days after the project was completed, Femi called her and asked her to meet him for dinner.  She was relieved he called and ecstatic to see him.  Over dinner Femi spilled the whole story of his marriage.

BULLET POINTS AS FOLLOWS: (WHAT THIS KIND OF MEN SAY)

HERE ARE SOME MORE BULLET POINTS:

Although Chioma was very confused by all of this, she couldn’t deny she felt it too.  She’d never seen herself as someone who would date a married man, but in all fairness, Femi wasn’t exactly married.  So, before dessert was ever served, Chioma and Femi were breathlessly on their way to a hotel.  The rest is history.  Twenty four months of history to be exact.

There have been snags in the divorce.  His wife is crazier than ever.  Femi says he’s actually afraid for his physical safety and he’s worried she’ll kill herself.  Femi and Chioma are more in love than ever, but Chioma is beginning to wonder if he will ever really leave his wife.

To which I say…

Trust me.  You do not want this man.  You may think you do, but you don’t!

First of all, statistics are not in her favor.  Many studies have been done on this and they show that in an affair with a married man less than 20% of those men ever leave their wives.  Out that 20%, fewer than 10% end up on committed long term relationships with their mistress. 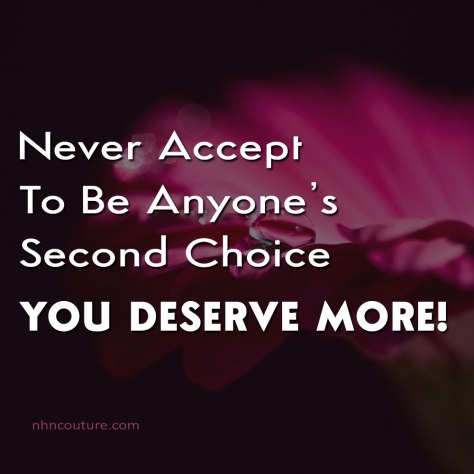 HERE ARE MY BULLET POINTS:

LET ME REPEAT – A MAN WORTH RISKING YOUR HEART FOR DOES NOT TAKE A MISTRESS.

So, if you find yourself asking the question, “Will this man ever leave his wife?” I would suggest you up your standards and think about what kind of man you really want to be with.  What kind of life do you really want to live?  Are you willing to live with the uncertainty about whether or not it will happen to you when the going gets tough, and it will, because life happens, and when life happens you will wonder.  Trust me.  You will.

If you’re dating someone’s husband, no matter how “crazy” his wife is, check yourself.  Why would you settle for someone who’s behaving that way?  Why are you?

FOR THE MARRIED, DO READ PLEASE.

TO THE DUBAI RESIDENTS THAT WANT TO ATTEND…

Sorry, no posts matched your criteria.